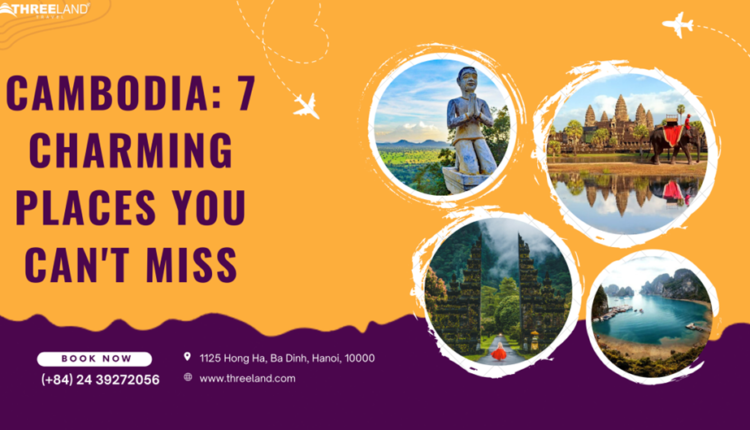 Although rightfully designated as a UNESCO World Heritage Site, the magnificent temples of Angkor are not the only vistas to see in the Kingdom of Cambodia.

Plus, the cruel Khmer Rouge regime of the 1970s and the subsequent civil war are the two things that Cambodia is most known for, yet its history also includes some of humanity’s greatest artistic achievements and most heinous acts.

So,  holidays to Cambodia are great for you if you’re tired of beaches, parties, and commercial tourism and want to strike something off your checklist that combines the old and the new.

A brief history of Cambodia

It is a nation in Southeast Asia that borders Vietnam, Thailand, and the Gulf of Thailand and has an area of 181,035 square kilometers. According to archaeological evidence, people lived in this region now known as “Cambodia” at least 40,000 years ago.

In the meantime, prominent Cambodians began adopting aspects of Indian culture, and by the 5th and 6th centuries, several Hindu kingdoms emerged in southern Cambodia.

Later, fearing Thai ambitions, the monarch of Cambodia requested French protection for his country in 1863. Up until the 1950s, France ruled Cambodia.

Then, the pro-American government that had taken control five years earlier was overthrown in 1975 by communist troops, sometimes known as the Khmer Rouge or Red Khmers, in the eyes of the outside world.

At least 1.2 million Cambodians perished during the Khmer Rouge era due to hunger, excessive labor, executions, and neglected illnesses.

Later, in accordance with peace agreements ratified in Paris in 1991, Cambodia temporarily fell under UN protection before the 1993 national elections. Finally, after decades of seclusion, Cambodia joined ASEAN in 1999 and became, for the first time, a full-fledged member of the Southeast Asian region.

7 best places to visit in Cambodia

This enormous powerhouse of the Khmer monarchs, Angkor, was built between 802 and 1432 and served as the biggest metropolis in the world throughout the medieval era.

But, there are now just those powerful temples standing where the city’s wooden houses had stood after the jungle surrounding them encroached and subsequently began to crumble.

The temples of the Angkorian era are accessible from the town of Siem Reap and are ambitious in scale and magnificent in artistry.

Tonle Sap Lake, one of Southeast Asia’s most distinctive natural and cultural attractions, is located just outside Siem Reap.

More than 300 different freshwater fish species, as well as snakes, crocodiles, tortoises, turtles, and otters, can all be found in this lake. Over half of the fish consumed in Cambodia comes from this valuable economic resource. Hence, it is a coveted place for nature lovers during their holidays to Cambodia.

In addition to being the home of black pepper, Kampot has a picturesque riverbank promenade with a lot of colonial buildings.

The charming riverbank village also serves as an entrance to Bokor National Park, a French hill station with stunning vistas and a comfortable temperature. It goes without saying that it is also one of Cambodia’s most prominent, exotic, and fascinating locations.

In this picture-perfect setting, you can go boating on the river, see ancient ruins at the Kampot Kampong Trach caverns, and take in sparkling waterfalls.

This green corridor, which boasts astounding biodiversity and amazing natural beauty, is home to several of Cambodia’s most remarkable natural landmarks and protected areas.

On your holidays to Cambodia, you can travel on a motorcycle to experience the scenery fully.

Some charming places include the undulating grasslands and breathtaking drop-offs of Khnong Phsar, remote Stung Areng Valley, eco-lodges in Botum Sakor National Park, and the Tatai Wildlife Sanctuary with its iconic waterfall, as well as a variety of eco-adventures and accommodations.

It is difficult to miss the seaside city of Sihanouk Ville if you like limitless expanses of white sand and green saltwater. It is the only deep-water port city in Cambodia.

Wanderers often refer to this city as “Heaven on Earth” by travelers. It is because of the captivating beauty that is concealed in the pristine natural surroundings and the incredibly deep blue of the sea.

The coastal city of Sihanouk Ville is a potential Cambodian tourist attraction because of its pristine beaches and warm ocean. You can relax and unwind on Serendipity Beach, Otres Beach, Independence Beach, and Kbal Chhay Waterfall.

The National Museum of Cambodia, which is close to the Royal Palace, is a must-visit location since it has the world’s best collection of Khmer sculptures.

It is made up of four exquisite pavilions and a lovely garden area.

The main draws during your holidays to Cambodia can include:

Phnom Penh was greatly abandoned in the Khmer Rouge horrors and left to wither and rot, now has recovered to become one of Southeast Asia’s most vibrant cities.

This is the most cosmopolitan area in Cambodia for tourists, with a café and dining culture that is unsurpassed across the remainder of the nation. Additionally, it is the location of a number of significant historical sites that aid in revealing both the ancient and present histories of Cambodia.

Southeast Asia is compacted into one manageable bundle in Cambodia. So, it yields to spend a few weeks traveling the length and breadth of this little nation since it offers the finest that the area has to offer.

Plus, you can also take Vietnam tours in combination with Cambodia, which is just next door and has an abundance of beauty.